[Blogger’s note: I was born and raised in America, moved to Canada for love in the early 2000s, and recently relocated again, in my 50s, with my British-born spouse to the southern coast of his homeland. This is an occasional series about learning new tricks in Merry Old England.]

Dinner, Supper or Tea: What Say Ye? Hashing Out the Terms for British Daily Meals 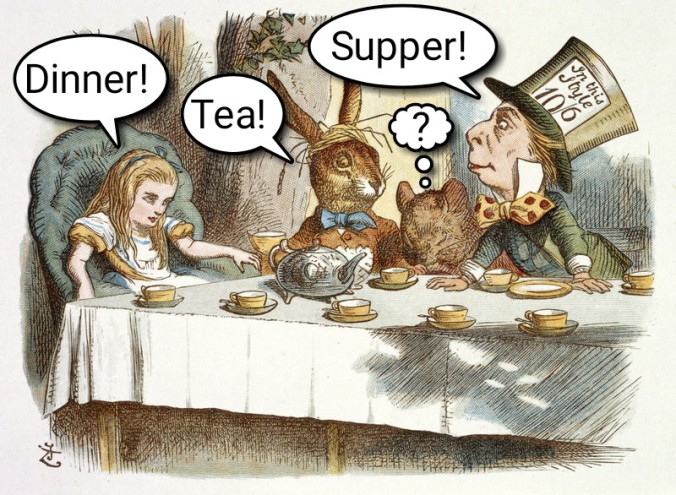 My spouse and I are about to celebrate the third anniversary of our move to the UK, and every once in a while, when I’m feeling cocky, I’ll think I’m ready to graduate from an entry-level understanding of British life to at least an intermediate status. Then, inevitably, I’ll be confronted with a humbling reminder that I still have lorry-loads to learn.

Take the confounding conundrum of what to call daily meals in Britain. Stateside, the terms are easily digestible. Virtually everyone in North America calls the first meal of the day “breakfast” and the midday meal “lunch.” For the evening’s repast, the folksy “supper” lingers in certain areas – I can recall my dear old southern grandmother beckoning us kids to the supper table – but “dinner” dominates in our pop culture-steeped minds and hearts. After work, we may fill our bellies with a Swanson’s TV Dinner or a KFC Dinner Box or, in Canada, a Kraft Dinner. (Mac ‘n’ cheese to the rest of us.) A few years back, US advertisers force-fed us the slogan “Beef. It’s What’s for Dinner,” much to the horror of vegetarians and contraction-phobes across the country. If we invite that special someone over for dinner and a movie, perhaps we’ll watch the classic Guess Who’s Coming to Dinner or the somewhat less lauded Dinner for Schmucks. And if we find ourselves lucky, in love or otherwise, we might exclaim, “Winner, winner, chicken dinner!” Though we shouldn’t get too attached to that catchphrase du jour as it’s sure to join “Whassup!” and “Gag me with a spoon” on the fad compost heap any day now.

But the Brits have concocted a far more complex hash of meal names, with a class-conscious aftertaste. One’s preferred choice of terms may determine his or her place at the table in British society. Breakfast, thankfully, is a no-brainer; that morning meal moniker is as ubiquitous in the UK as it is across the pond, although many Brits shorten it to the more adorable “brekky.” Whether it’s a full-English, full-Irish, full-Welsh, or full-Scottish brekky is a contentious topic for a later blog post. After breakfast, it gets trickier. Class and regional divides come into play in controversial ways. There’s a reason why, in my interviews for this piece, the phrase “social minefield” came up more than once, as did “opening a can of worms.” According to the internet, which as we know never lies, members of the northern working-class tend to call the midday meal “dinner” and the evening meal “tea,” typically a meat-and-veg affair served around 6:00 pm. Whereas “lunch” (midday) and “dinner” (evening) are the go-to terms for the southern middle and upper classes  – “middle class” here having stronger connotations of higher education and relative wealth than it does in the US. (That squishing sound you hear is the worms surging out of their tin prison.) Just to be difficult, some posh people apparently call the midday meal “luncheon” and the evening meal “supper,” as in “We’ve invited the Dowager Countess over for luncheon, and later Cook is making jellied grouse in serf’s tears for supper.”* But “supper” can also mean a light, late-night snack in some quarters, so one could conceivably have breakfast, dinner, tea, and supper – or breakfast, lunch, dinner, and supper – all within the same day. Though one might want to think twice about such an overstuffed eating schedule. One’s trousers are looking a little tight. Just saying.

If these basic guidelines seem perplexing, try factoring in the copious exceptions. In this transient age, people who have grown up saying one term or another may cling to it even after their addresses or lots in life change. For instance, on the south coast where my partner and I happily reside, we have a northern-born chum who is now a senior lecturer at the local university, and a published author, not traditionally working class occupations. Yet he continues to call the evening meal “tea.” But other Brits have been known to switch allegiances or even split the difference following a shift in circumstances; if a “tea” eater and a “dinner” devotee meet and pair off, grudging compromises may have to be made. My mate Tony tells of a friend from Liverpool who calls the evening meal “tea,” but his partner, a southerner, says “dinner,” except on the weekends when they have both agreed on “tea.” “There’s no logic to it,” Tony concludes with a chuckle.

The word “tea” itself has its own multiverse of meal-related meanings.  Besides the aforementioned evening tea, there’s also afternoon tea, a special-occasion treat usually served between 2:00 pm and 4:00 pm. This triple-tiered tower of carbs can include finger sandwiches, cakes, and scones with clotted cream, with scant space left over for vegetables or fruit, unless you count jam. Once primarily the indulgence of hoity-toity ladies wearing fancy hats and pince-nez, the afternoon tea’s popularity has broadened to encompass tourists who clog English tea rooms clad in cargo shorts and “Property of Hogwarts” hoodies. Finally, you have tea, the hot drink, which the British consume with afternoon tea and evening tea and every other meal, every day forever and ever, as required by law.

Then there’s the impenetrable riddle of school dinners vs. packed lunches. Midday meals in all UK schools, in “lunch” and “dinner” territories alike, are dubbed “school dinners” and have historically been dished up by “dinner ladies.” (In this era of gender equality, are there dinner blokes? Dinner dudes?) But if a student brings food from home, that’s a “packed lunch.” Adults also carry packed lunches with them to work, though presumably not in boxes with pictures of Elsa from Frozen on the cover. (But if you do, I don’t judge.) My friend Nick, who grew up in the Midlands and went to Birmingham University, toiled in a northern factory during the summer holidays and says the workers there referred to their packed lunches as “snap.” I think something just went “snap” inside my brainbox.

And I haven’t even mentioned elevenses, which is not, as I thought, a made-up meal for Hobbits but an actual, real thing! And also a bridge too far.

So how is a poor, simple immigrant supposed to unscramble all this? Here I turn to wise Elsa and her signature song, “Let It Go.” I’m trying to make peace with the fact that in all likelihood I will never understand it. And I’m sticking with the horse that brung me, calling my daily meals breakfast, lunch, and dinner, like the stubborn Yank that I am. If anyone dares to make assumptions about my class, I’ll just proudly declare that I don’t have any. But should I find myself caught in the middle of a heated dinner/supper/tea discussion, I’ll feign comprehension, so I don’t seem like an idiot. I’ve been practicing in front of a mirror, nodding earnestly and saying things like “Yes, of course, snap. Obviously.” I got to try out a few of these “light bulb moment” looks when the subject arose at a recent dinner party – but not a tea party – that my spouse and I attended. Each guest seemed to identify with a different set of terms. As they peppered me with myriad meal names, my facial expression read “I’ve got it,” but behind the façade, my addled mind was on the ropes. Then the guests delivered a pair of knockout blows, steering the conversation to a vigorous debate on what to call a house’s front room/drawing room/living room/lounge, followed by a spirited round of toilet, lavatory, or loo? Forget about reaching a more advanced level in my British education, it’s going to take all of my wits just to keep from flunking out. Absolute beginner now, absolute beginner forever? It’s something I ponder wistfully each night as I sit down at the table and tuck into the evening’s… whatever.

*(Blogger’s note to my posh readers, if there are any: I kid! I kid! Everyone knows that serf’s tears are ONLY served with lark’s tongues. )

One thought on “Absolute Beginner: The Adventures of a Middle-Aged U.K. Newbie”