My Two Cents Pence: Currency Exchanges with the Locals 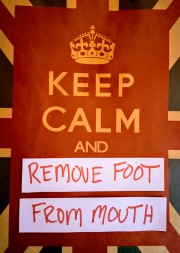 Around the village where we live now, I’m known as “The Dollar Dimwit.”

Okay, nobody has actually called me that to my face. The denizens of Southsea, a picturesque portion of Portsmouth that abuts the English Channel, are far too polite to ridicule me directly—thus far. But I’m sure they’re thinking it as I blunder into their shops and restaurants and blurt, in my all-too-noticeable North American accent, “Is this item on sale for 12 dollars?” Or, “I’ll have the five-dollar lunch special, please.” Or, “The total comes to 3.50 you say? I think I have 50 cents in my pocket.”

Of course, here it’s pounds, not dollars, and pence—or p—not cents.  News flash for folks who live under rocks or on the surface of Mars or, apparently, within the confines of this writer’s skin: Britain’s currency and the names for said currency are unlike those in America or Canada. (Read my similarly obvious findings on British radio in part one of this series.) Looking at a handful of the native coinage, the contrast with the loose change I grew up using in the States is quite conspicuous.  The five pence piece, for example, is much smaller than the American five cent piece, more diminutive even than the dime. The 10p coin, on the other hand, is roughly the size of a quarter. The pound coin is about the size of a nickel, but weightier. It feels like real money in your palm. And the seven-sided 20 pence piece is a quirky outlier. It looks like something you might find on a charm bracelet. (The larger denomination notes are an appealing rainbow of colours similar to the paper money spectrum in Canada. I’m pretty sure the Queen’s face is on all of them.)

My brain has dutifully registered all of these differences and is well-versed in British monetary terminology. It just neglects to tell my mouth sometimes. I’m not a particularly shy or introverted person and despite a wealth of past evidence that suggests I should consider locking myself away and never conversing with anyone again so as to avoid embarrassment, I possess a certain confidence when it comes to meeting people. When we moved to the U.K. several months ago, my game plan was to greet my new English neighbours cordially, to be open to learning from them as much as I could, and above all, to not put my foot in my mouth too often. For the most part, that plan has been successful, but a few things trip me up and money seems to be the biggest tripper. My poor, patient, British spouse has had to bear reluctant witness to many of these public displays of gaucherie. We’ll be in a department store and I’ll announce loudly, for all of southern England to hear, “Ooh, they have a food processor for only 25 dollars! “Pounds,” my spouse will intone with Zen-like calm, halo aglow and hovering over his head. These gaffes in his presence are doubly annoying because when we lived in Canada, he never had the inverse problem. He never tried to buy a 37-pence stamp from Canada Post or marched into Canadian Tire and noisily inquired about purchasing a 25-pound gift card.

It doesn’t stop with the buck—sorry, the quid. I’m also guilty of non-currency-related bloopers. Take my recent flub at the local butcher shop. “About how long do you cook these stuffed chicken breasts?” I asked the cleaver-wielding gentleman behind the counter. “Oh, I’d give them about 30, 35 minutes,” he replied helpfully. “And at what temperature?” I continued. “Around 400?” He gaped at me with distaste, as if I had just passed audible gas in his establishment. “Er, I mean 200?” I corrected, realizing my Fahrenheit faux-pas.  “Gas mark 6,” he grumbled. I slunk out of the shop, not knowing what in the world “gas mark 6” meant.

But money continues to be my main bane. The slip-ups happen frequently enough that even if I come away from a transaction without having uttered the words “dollar,” “cents,” or, heaven forbid, something like “quarter,” I’m left with the nagging sensation that I did. I think I have found a way to keep myself in check, but it comes at a cost. When I’m in a shop and I’m about to give my money to a clerk, if I stare at the money for a few seconds, really focus on it, and then speak slowly, I’ll be able to make it through okay. “Here… is… a… pound,” I’ll say, looking hard at the coin as I hand it over. “And… here… are… 15… pence.” This prevents me from uttering the offending “d” and “c” words, but unfortunately it leaves the clerks with the impression that in the mental faculties department, I’m somewhat short-staffed. Upon my exit, I imagine them turning to each other and smiling sympathetically. One of them will tap her forefinger to her temple, a universal gesture no one can misinterpret. “Bless ‘im,” she’ll sigh, ever so thankful that she, at least, still has her wits about her.

5 thoughts on “Absolute Beginner: The Adventures of a Middle-Aged U.K. Newbie”