Wait, I Have an Accent? How the British React to an Alien Voice in Their Midst 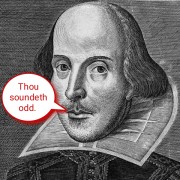 If you heard me talk, you probably wouldn’t be able to guess right away where I’m from. I was born in Texas and throughout my childhood my family moved all over the American South, from Florida, back to Texas, to Florida again, then to Tennessee and finally to Georgia, where some of my relatives still live. By rights the words I utter should be as drenched in drawl as those of that Clampett clan who loaded up the truck and moved to Beverly—Hills, that is. (Swimming pools. Yada-yada.) Yet due to a fluke of nature, or perhaps congenital obstinance, I’ve resisted the Dixie diction and speak in a voice that is only fleetingly Southern, meaning a twangy syllable might slip out when I’m angry or tipsy, but of course I’m hardly ever either. (Insert winky emoji here.) The rest of the time, it is rather featureless. I asked my spouse to describe my voice and he deemed it “sonorous, uninflected, middle-American.” Notice he didn’t add “irresistibly sexy” and “almost frighteningly macho,” but that’s a topic for another, more private discussion between us. I’m confident in the assertion that, compared to many people from my native region, I have gone through most of my life pretty much accent-free.

Then I moved to the U.K.

With my Anglo-Scottish ancestry and everyman appearance, I can walk among the British populace without causing much of a fuss… until I open my mouth. Suddenly, I become an alien creature. I might as well be dripping acid from my mandibles and galumphing after Sigourney Weaver. Sure, there’s a scattering of us Yanks milling around London at any given time, both tourists and perma-expats like myself. But in other areas of the country, including Portsmouth where we live, I’m still an oddity. In parts two and four of this blog series, I briefly touched on the feeling of being a sonic sore thumb, and bringing it up again here may risk belaboring the point. But I still haven’t completely quashed the self-consciousness that has come with moving from a place where all of my neighbors sound like me, give or take a “y’all” or a “you betcha,” to a place where none of them do.  Watching almost everyone I say hello to do a double-take can be a bit of a head trip.

For my British-born husband, this is a karmic moment to relish. Prior to our relocation back to his place of birth, he lived in Canada off and on for nearly 25 years and while there also traveled extensively in the U.S. Everywhere he went in North America, people’s reactions to his voice were the same. “I love your British accent!” they’d squeal. To which he’d reply, in typically British fashion, “I don’t have an accent. All of you do.” One or two skeptics even asked, “Are you really British?” As if he were a covert Nebraskan trying to stay in character until his upcoming audition for Downton Abbey 2: Matthew Crawley Lives. For the record, no one here has questioned my authenticity as an American.

Fortunately, after the initial surprise of hearing me speak, the vast majority of Brits that I encounter recover quickly and greet me with warmth and noninvasive curiosity. They will frequently inquire where I’m from and I’ll say, “I moved here from Canada last year, but I’m originally from the Southern U.S.” I like how that makes me sound worldly and sophistimacated. (©Homer Simpson) They’ll usually zero in on one country or the other and counter with a relatable claim of their own, such as “My brother lives in Vancouver” or “The missus and I love to go to Vegas.” I’ve gotten a few strangely specific comments.  “You’re from America?” my barber noted mid-snip. “You know who I like? That singer with the long hair. Carly Simon.” Hey, who doesn’t? She is a national treasure. Still, it’s kind of an out-of-the-blue conversation starter. Some folks have been downright gushy in their responses. When I told a cab driver that I’d lived in Georgia, he got all dewy-eyed and waxed rhapsodic about the Masters Tournament in Augusta. The word-picture he painted of that unostentatious town brought to mind nothing less than an over-the-rainbow Emerald City. (But come to think of it, those golf fairways are a very Technicolor shade of green.) And when informed of my Canadian provenance, a nurse who was monitoring me during a recent medical procedure breathlessly proclaimed that she was obsessed with Niagara Falls and her dream was to buy a house overlooking that natural phenomenon. Now, I’ve visited the falls many times and they’re quite something, but I could never live that close. The constant rushing water would make me want to pee all night.

Some Brits have, um, more probing questions, shall we say? I’ve been entreated to explain the proliferation of guns in America and the political success of Trump. In less awkward exchanges, I’ve been called on to give a complete history of American Thanksgiving and to judge whether the trees shading our local supermarket are Canadian maples. In all of these cases, my tenuous grasp on the subjects of firearms, politics, harvest observances and botany has been glaringly apparent. If I’d known there was going to be a test, I’d have done more homework prior to arriving here. And maybe printed up and laminated a list of bullet points to hand out.

I’m not going to lie, there have been rare occasions when I’ve been on the receiving end of a sour look. Recently, in our local card shop, I overheard two ladies chatting about where to find sparklers for Guy Fawkes Night. (Remember, remember, the fifth of November.) When I suggested they try a nearby hardware store, one of the women pulled such a face that you’d assume I’d chosen that very moment to doff my trousers and poop on the carpet. It only took me saying hello to a clerk while I was buying a chocolate bar at the Portsmouth branch of the stationery chain W.H. Smith to elicit from her this tart retort: “You’ve taken our Cadbury.” I was bewildered. Was she accusing me of shoplifting? But that didn’t compute because there I stood, directly in front of her, paying for the bar with real British money. I offered up a noncommittal shrug and took my leave, but later recalled reading a news article about how Kraft Foods, a dastardly American conglomerate, had bought Cadbury a few years back and, in the opinion of many British chocoholics, was in the process of destroying it by using substandard ingredients and adding tacky extras like Oreo bits and such. In light of this, the clerk’s scolding made a bit more sense, although I did wonder why she held me personally responsible.

Then there is the peevish cleaver-wielder at our otherwise friendly neighborhood butcher shop who can barely conceal his disgust when I speak, wincing visibly at my line of inquiry on the price of his bangers and replying in grudging grunts. Once, he shorted me three pounds in a transaction. As he slapped the insufficient coinage in my palm, I swear I could hear him muttering under his breath, “That’s for taking our Cadbury.”

I know, I know, I could have it much worse. I could be a foreigner who’s just learning the language or have cultural or religious affiliations that might further obstruct communication between me and the locals. Us English-speaking North Americans have got it pretty cushy here, all in all. I’ll try to remember that the next time I’m squaring off with that stink-eyed butcher and insisting on the correct change from my sausage purchase. And if the insecurity of being a vocal outlier ever threatens to overwhelm, there’s always my side business of ruining Britain’s beloved chocolate brands to distract me.

One thought on “Absolute Beginner: The Adventures of a Middle-Aged U.K. Newbie”