Late for the Train: Parking the Car—Permanently?—and Hopping Aboard Britain’s Railway System 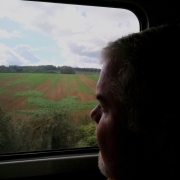 When it comes to getting from point A to some faraway point B, I’m an avowed overland man. I get no kicks in a plane, what with fares ballooning in inverse proportion to shrinking seat size and leg room, and airline meals, never Michelin Star-worthy to begin with, now so inadequate that you count yourself lucky if you’re served a lukewarm pizza pocket in a cardboard sleeve. With ships, ferries and other waterborne craft, my fascination is strong but my sea legs and stomach are weak. But take me there on terra firma, via steel wheels or rubber tires, and I’m one happy pilgrim.  Some may find the incremental nature of land travel, the steady procession of miles/kilometres one after the other after the other, to be about as exciting as a PowerPoint presentation on navel lint. I find it can be soothing under the right circumstances, traffic jams and jabbering fellow travellers notwithstanding. The opportunity to take in vivid, varied scenery at one’s leisure while allowing the mind precious time to roam, free from distraction, is better stress therapy than a thousand fidget spinners.

Of course, in America, the car’s been the dominant mode of ground transport for many generations now. Growing up in the golden age of the wood-panelled station wagon, I have fond memories of my family’s periodic road trips. I’d hunker down in the wagon’s rear compartment and create a fortress of solitude out of blankets and pillows, with our luggage as the ramparts. There, sequestered in Fort Doug, I’d read, colour, or just watch other families whizzing by in their Chevy Caprices and Oldsmobile Vista Cruisers. Okay, maybe more like moseying than whizzing. And when the tranquillity of the journey threatened to lapse into boredom, there’d be a thrilling detour to that old highway staple, Stuckey’s, for essential pecan log and peanut brittle supplies.

In my old Southern U.S. stomping grounds, long-distance passenger trains were, and still are, few and far between. I didn’t actually take one until I was in my mid-20s when, on a youthful whim, I moved to Boston for a short stint. One weekend while I was living there, I took Amtrak down to New York City to stay with a friend. It was a pleasant enough excursion, but I was still too immature and restless to enjoy the experience to its fullest. I do remember one transcendent moment. As the train meandered through Mystic, Connecticut, in the mid-morning fog, I gazed out at the quaint New England cottages in the mist and a feeling of hushed wonder briefly enveloped me. Then I clicked “Play” on my Walkman and returned to my Depeche Mode cassette. (This was eons before smart phones and social media had us all in their clutches.)

I would be well into my 40s before I started to appreciate taking passenger trains, when I moved to Canada. (I’ve never warmed to subways, which are a whole other can of sardines.) Every so often for a long weekend getaway, the spouse and I would book passage on VIA Rail Canada from our home in Toronto to Montreal. Once, we ventured as far as Quebec City. If we could get a deal on the price, we’d treat ourselves to the first-class car, which meant spacious, reserved seats, a booze trolley, and generally decent meals—better than a pizza pocket anyway. But even if we took “cattle class,” as my spouse calls it with a snicker, we’d buy a bottle of wine and some pain au chocolat, ‘cause we’re fancy like that, and make the journey as fun as we could. However, because Canada is so vast and many of its points of interest are far-flung —getting to Montreal took more than five hours —these jaunts were relatively rare. In the 13 years that we lived there together, we took maybe five long-distance train trips.

It’s been a full year now since we moved to the U.K. and in that time, we’ve taken the train on 26 occasions. And we have three more trips scheduled for the next month. Granted, most have been short expeditions to London on our regional line, an hour and a half each way from the southern coast where we live, a bit longer than your average commute but not exactly the Orient Express to Vienna.  But we’ve also been to Brighton and Salisbury, to my ancestral home along the river Hamble, and to visit friends in Surrey and Sussex. Recently, we took a delightful trip on Virgin Rail to York in the north of England, where, naturally, we visited the National Railway Museum. I’ve even taken the train on my own—in my big boy trousers! —to meet with my immigration lawyer in London and to shop at IKEA in Southampton.

Britain’s railway system is the oldest in the world, and one of the most extensive. In this small country, trains go virtually everywhere. It’s how people get around. Well, sensible people, at least. Some mad Brits continue to drive cars, for masochistic reasons of their own. The motorways are always jam-packed, parking is a hassle in many cities and towns, and the rural lanes can be so narrow that you frequently have to pull off into a pasture to make way for an oncoming country squire on a penny-farthing. (In reality, usually another motor vehicle, but I couldn’t resist the visual cliché.) The train is pretty much the only option for me to travel any substantial distance in the U.K.  My British-born partner’s driving skills are questionable at best—he once ricocheted a rental car off of two other rental cars while reversing into a parking space—plus he hates to do it anyway. And I have zero confidence in my ability this late in the game to learn how to drive on the English side of the road. And roundabouts? No thank you.

So it behooves me to clasp train travel to my bosom and luckily, I adore it. But it’s not blind adoration. There can be problems with delays and detours due to rail works, and the stations in London, particularly during rush hour, can be stressfully hectic. There are strikes and walkouts by railroad employees. Our chums in Sussex have been dealing with a dispute between the conductors and the management of their regional line over who gets to open the train doors. Yes, it’s dumb. And it’s been going on for almost two years, leaving travellers seeing red due to repeated cancellations and reduced service. Still, that hasn’t deterred our friends from opting for rail travel on their many outings around the country, even though they own a roomy automobile. “[We take] the train whenever possible,” the designated car driver explains. “I can have a gin and tonic and sleep!” If that’s not the best advertisement for the railway system, I don’t know what is.

These feelings of affection may be finite. There’s a chance—a razor-slim one—that I’ll be struck by a sudden comprehension of British driving practices and want to hit the road in an automobile again. Or there could be major advances in remedies for seasickness which would allow me to sail into ports around this island nation in my own dinghy, which I’ll cheekily dub Li’l Mayflower. But for now, the train’s the thing, and I’m relishing rolling across this lovely adopted home of mine and staring out the window at its amazing sights. There’s a flock of sheep! There’s a castle! There’s an idyllic English village right off of a postcard!

At least I do that for, like, 10 minutes. The rest of the trip, of course, I’m checking Facebook on my phone.