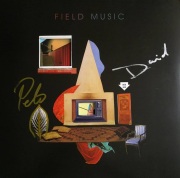 Serendipity bonded me to the English pop-rock combo Field Music, led by Sunderland brothers David and Peter Brewis, on a sunny afternoon last winter. I’d only recently become aware of the 15-year-old group, having read a rave review of its sixth album, Open Here, in a magazine, and listened to the catchy, lyrically potent single “Count It Up” online. Curiosity piqued, I ambled down to my favourite Portsmouth record shop-slash-eatery Pie & Vinyl to see if perchance the album was in stock. I entered the shop to find, amongst the pies and the vinyl, none other than the Brewis bros performing an in-store set to a rapt audience. I was only able to catch the last song, but I grabbed a copy of Open Here and got them to autograph it. (Dig their marker scrawls on the cover in the accompanying photo.) In that moment, I felt that fate was telling me I’m meant to be a fan.

And this is an easy band to admire, particularly for an Anglophile like me who spent a good chunk of the 1980s in thrall to such quirky British pop groups as XTC, China Crisis, and Prefab Sprout. Field Music’s latest is steeped in influences from that era. A damning indictment of upper-class white privilege, “Count It Up” is a thematic cousin to XTC’s “Respectable Street.” (“If you’ve ever visited another country and waltzed through passport control, then count that up.”) The eerie “Front of House,” which lays otherworldly strings and flutes over the restless heartbeat of synth percussion, sounds like a hidden track off of one of Peter Gabriel’s solo albums. I found Open Here pleasant enough when I first played it, but it took me a while to grasp how truly great it is. That’s because, unlike the flashier artists on my list – I’m looking at you, Greta Van Fleet – the Brewises don’t stomp and shout for attention. They let their finely wrought melodies reel you in little by little with each listen. Many months after the happy surprise of that record shop encounter, and many, many turntable revolutions later, I’m hooked.

[Blogger’s note: *Amid alarming reports on the demise of the album, I humbly submit my picks for the best full-length releases of 2018. I’ll post them one at a time over the next few weeks, hopefully getting to #1 before Valentine’s Day! Want to save the album? Then go out and purchase a vinyl LP – or a CD, if you must – from a real bricks-and-mortar shop. Don’t just stream random tracks to your phone! Read my extended rant on the subject here.]