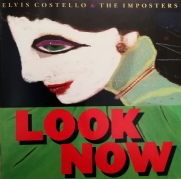 It was love at first listen. My devotion to Elvis Costello started when I wandered into a suburban Atlanta record store at the tender age of 16 and heard This Year’s Model blasting out of the sound system. I snapped up that album, Costello’s second, then and there, and returned to buy his equally brilliant debut, My Aim Is True, the next time I got paid. Dutifully, I purchased each successive release for many, many years, and saw him play live on three concert tours. Other than David Bowie, no solo artist takes up more space in my record collection. But as with any lengthy relationship, ours has had its rough patches. I’m lukewarm about Costello’s forays into genres outside his pop-rock wheelhouse, including classical music (The Juliet Letters) and country (Almost Blue). And sometime after 1989’s Spike, which featured his biggest U.S. hit, “Veronica,” the intensity of my ardour began to wane. In the years since, it’s dulled to a pleasant, comfortable-shoe familiarity. These days, I test-drive his latest efforts via streaming before committing to an LP or CD. I’ve never entertained the thought of “breaking up” with him – he’s meant too much to me in the past for that to happen. But the old magic has gone astray.

It’s a nice surprise then to discover that Costello’s 30th studio album is an aural love letter of sorts, both to long-time fans like myself and to those early works that established him as a musical genius. Compiled from various recording sessions over the past decade, a few of which were for stage musicals in development that never fully gelled, Look Now boasts some of his most ingratiating material in eons. The vibrant production is reminiscent of the more filigreed albums in his catalogue. The sassy brass that punctuated Punch the Clock adds zest to “Under Lime,” the amusingly self-aware lead-off track that finds Costello crooning “Now he’s back in showbiz, trying to make a comeback.” The wistful woodwind accompaniment on “Stripping Paper” would sound right at home on his 1982 baroque-pop masterpiece Imperial Bedroom. And while nothing here quite sticks the landing the way “Pump It Up” or “Alison” did — there’s something to be said for repeating your song’s title over and over in the lyrics until listeners get the point – the best tunes here, “Unwanted Number” and “Mr. And Mrs. Hush” among them, are streamlined and infectious.

A bit of the self-indulgence that has made Costello’s recent songwriting challenging is still evident. While “Under Lime” is a dazzling display of his unparalleled wordplay, at 5½ minutes it’s way too long. (I still yearn for the bouncy brevity of the tunes on Get Happy!) But quibbles aside, this is a splendid late-career treat. 40-plus years into his run, Costello has reminded his faithful fans why we adored him in the first place, and he just may win a few new devotees in the bargain. It’s good to have you back, E.C.