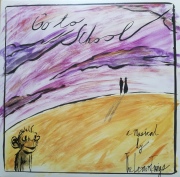 I remember, way back in the mid-1980s, playing the debut album by They Might Be Giants for a former roommate, a semi-Goth type with a fondness for the gloomier realms of rock music. He balked at the wackiness of such songs as “Put Your Hand Inside the Puppet Head” and was downright offended by the use of accordion. “In 10 years, are you still going to be listening to this?” he scoffed. The joke was on him because TMBG has endured. Heck, “Istanbul (Not Constantinople)” alone has secured a lasting place in the pop pantheon, and the duo just recently released its 21st studio album. Will the career of the Lemon Twigs, another zany twosome from New York, be as long-lasting? Brothers Brian and Michael D’Addario, only 21 and 19, respectively – more millennials! – certainly have grand ambitions, and the talent to go the distance. Their sophomore album, Go to School, is an unabashedly theatrical rock opera with a campy, ‘70s-glam glaze. It’s like the Who’s Tommy reimagined by a supergroup consisting of Sparks, Todd Rundgren, and Roxy Music. But instead of a pinball wizard protagonist, its central character is a chimpanzee named Shane. Raised by a human couple, Shane is enrolled in a school where he mingles with his evolutionary cousins, with calamitous results. The D’Addario siblings wrote and produced the album, and played nearly every instrument on it. They even recruited Rundgren to warble on two songs, including the hilarious “Rock Dreams,” which finds “mom” Carol expressing misgivings about rearing a chimp at the expense of her musical aspirations, while “dad” Bill (Rundgren) calls Shane down for breakfast. (“School’s in an hour!”) If all the dots on the path of Shane’s emotional journey don’t quite connect, Go to School is on the whole an impressive and gloriously goofy achievement, and it promises great things to come from this daring duo. I can only guess what my old roommate might think.