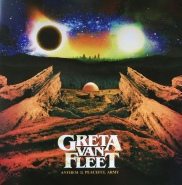 Are these guys for real? That was my first impression upon hearing Greta Van Fleet’s full-length debut, a suspiciously spot-on paean to 1970s arena rock. “Age of Man” kicks off the album with an intro of pretty strings and flutes, evoking wandering minstrels at a Renaissance Fair. Then Joshua Kiszka’s voice, which rivals Rush’s Geddy Lee and Led Zeppelin’s Robert Plant in its lofty pitch, pierces the pastoral mood. “In an age of darkness, light appears,” Kiszka, 22, screeches, sounding for all the world like a leotard-clad, codpiece-stuffing rock star from the era of lava lamps and gatefold album sleeves. The rest of the band – Josh’s twin bro Jacob Kiszka on guitar, younger sibling Sam Kiszka on bass, and family friend Danny Wagner on drums – enters with a prog-rock wallop and we’re off with a sound that borrows a bit from Rush and similar groups and a whole lot from Led Zep. It’s all alarmingly reminiscent of a bygone musical style that fell out of fashion the moment the Ramones played their first gig at CBGB’s. So, these many years later, in an age when irony is king, one can’t help but ask, seriously, are these youngsters pulling our legs?

If it is a joke, it’s a really good, well-researched one. Taking their band name from an elderly neighbour in their hometown of Frankenmuth, Michigan, the Kiszka brothers are devoted students of the FM-rock masters. They grew up devouring their parents’ record collection, which included classics by Zeppelin, the Who, and the like. And they’ve definitely developed the chops to do this anachronistic genre justice. If Jacob isn’t up to the level of his idol Page on guitar – who is? – he’s no slouch when it comes to meaty riffs and soaring solos. There are times when Greta Van Fleet is too blindly faithful to its ‘70s influences. The sexism that permeated those epic tunes back in the day sneaks into one or two songs here, including “You’re the One.” (“Babe, you’re so young and pretty, but you’re evil, you oughta know.”) But if you’re a fan of Me Decade musical bombast, you’re mostly gonna love this. I am and I do.