Celebrating the last truly great decade for pop music.
A pox on your aughts! 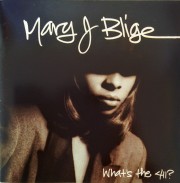 I read this morning that Mary J. Blige’s debut album “What’s the 411?” was released on this date in 1992. I got the opportunity to see her perform live in the mid-‘90s in Atlanta and report on the performance for Rolling Stone magazine as part of a “50 Shows in 50 States” special issue, for which a writer from each state covered a different summer concert. It was my first article for a national magazine and I was super excited, until I got the issue and discovered that a great majority of the 50 of us wrote in a strikingly similar style, as if we were all cribbing from the same concert review template. It was a bummer to find out that, in this case at least, my journalistic voice was so generic. Mary’s voice though? One of a kind.
Mary J. Blige — “Real Love”