4: The War on Drugs – A Deeper Understanding 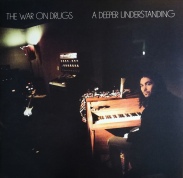 Some of the most interesting acts in pop music today– the 1975 and M83 among them—tease fresh sounds out of the stalest of sources, Top 40 radio staples from the 1980s. Count the War on Drugs and its mastermind, Adam Granduciel, among these intrepid hipsters. The band’s fourth album is a trash heap-turned-treasure trove of Reagan-era pop-rock melodies. Stripped of Granduciel’s scratchy, Dylan-esque voice and sporadic squalls of abrasive indie guitar, the songs on A Deeper Understanding could easily qualify as deep cuts on albums by Don Henley or the Grateful Dead circa In the Dark. (Some critics have thrown Bruce Hornsby and Steve Winwood into this mix.) As on 2014’s breakthrough Lost in the Dream, Granduciel lets his nostalgically disarming compositions stretch and breathe. Most of the 10 tunes on A Deeper Understanding are six to eight minutes in length, and the centerpiece “Thinking of a Place” goes to 11. (11:10 to be exact.) Scrawled across these expansive canvases in broad, satisfying strokes are Granduciel’s heartfelt lyrics, classic singer-songwriter reflections on loneliness, yearning and the possibility of redemption. This is one of those rare records that makes you reevaluate music you likely wrote off ages ago— hey, come to think of it, Henley’s The End of the Innocence does have its high points– while also forging an invigorating path forward.