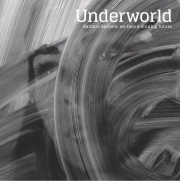 Much like New Order’s 2015 comeback “Music Complete,” which topped my 10-best list last year, Underworld’s latest is an all-too-rare example of an aging group that hasn’t lost its youthful potency. Nine albums in, electronic envelope-pushers Karl Hyde and Rick Smith can still school the current crop of interchangeable EDM newbies on how to make dance music with substance. “Barbara” bats away all doubts with its striking opener, “I Exhale.” Over a throbbing industrial pulse, Hyde spits out spoken-word snippets that evoke overheard bits of conversation on a busy street corner or crowded Tube train. Crackling with urban tension, it’s the highlight of this concise seven-song set. A close second is “Nylon Strung,” the album’s closer. Where Hyde’s delivery is all edgy confrontation on “I Exhale,” here it’s warm and soothing as he chants “Open me up, I want to hold you, laughing” over a percolating techno beat. The tempo ebbs and flows in between these bookends, with the Latin-kissed “Santiago Cuatro” providing a lovely chilled-out interlude, but “Barbara” never loses its swagger. Bonus points for the year’s most intriguing—and touching—album title, taken from an exchange between Hyde’s mum and dad shortly before his father died. If this late-career triumph is any indication, Underworld’s future shines bright indeed.