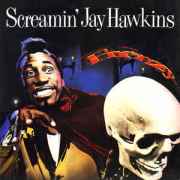 Disclaimer: The brief recollection you’re about to read is an assortment of dusty memory shards pieced together in an old pickled noggin. Events described may skew toward the true-ish rather than the dead-on accurate.

I got turned on to Screamin’ Jay Hawkins via the 1983 Jim Jarmusch movie “Stranger Than Paradise,” which memorably featured his signature song, “I Put a Spell on You,” on its soundtrack. Smitten with Jay’s unhinged sound, I dutifully purchased his compilation CD “Frenzy” and fell in love with more demented ditties, including “Alligator Wine,” “Little Demon,” and the title track. A few years later, I was living in Boston and Jay came to the area to play a gig. I’d read that his live performances could be playfully macabre—he’d been known to pop out of a coffin at the start of some concerts. As an avowed fan of over-the-top rock theatrics, I knew I had to be there.

The venue, Nightstage, in Cambridge, was a cozy, wood-paneled den ideally suited for non-threatening acoustic folk. A modest stage fronted neat rows of covered tables with votive candles flickering atop each. Tracy Chapman had played there recently, as had Jesse Colin Young.  It was a strikingly tame setting for Jay’s stentorian baritone and haunted-house shenanigans, but devotees of live music know such incongruities are common. I once saw the Cowboy Junkies perform in a multi-level dance club, their hushed, delicate tunes rendered all but inaudible by the teeth-rattling techno beats pulsing from the floor below. Another time, I saw the Ramones play a posh hotel ballroom, which was likely condemned afterwards.

Anyway, at show-time, Jay strode through the small but spirited crowd clutching a skull-headed scepter like a crazed king of the underworld ascending the throne. (Sadly, he had ditched the coffin prop for the night, I’m assuming due to lack of stage space.) With a flourish of the flowing cape fastened around his neck, he seated himself at the piano. Though nearly 60 at the time, he brought ferocious energy to a set that was equal parts thrilling and hilarious. His booming voice was only half the fun; wild gesticulating and pop-eyed expressions pushed the tunes to crazy comic highs. The grunting,  groaning and grimacing during “Constipation Blues” was vividly crude, as was his between-song banter. At one point, he abruptly stood up from the keys, took a long, slow, deep breath and growled, “Mmm! I smell furrrrr  burgerrrrrrr!” I have no idea what this means, but I apologize if it offends.

One prop that the stage could accommodate—well, almost, in turns out– were small exploding pods that Jay flung to the floorboards for emphasis during the set, where they detonated with a pop, sparks and a puff of smoke.  I believe kids these days call them “ninja snaps.” The most dramatic of these moments came very near the end of his final number, “I Put a Spell on You. ” (How could he close with anything else?) Jay pounded the keys and drove the song toward its peak until at last he hollered the climactic line, “Because… you’re…MINE!” As the final word left his mouth and the audience leaped to its feet, he hurled a pod downward. Poof! A plume of smoke and a shower of sparks whooshed up from the stage. The crowd cheered and Jay banged on the keys and no one noticed as an errant ember sailed through the air high over the first row of tables, where it landed in the bushy, Flashdance-inspired mane of a woman whooping in the second row.  The spark ignited quickly and there was a blur of activity as patrons behind her rushed up to swat at her head with whatever they had available, napkins, jackets, bare hands. Jay caught on to the situation and his “show face” faltered for a fleeting second. But the spark was out almost as soon as it started and the woman was fine, though obviously startled by all the swatting  and with a few singed ringlets for souvenirs. So with just a whiff of burnt hair lingering in the room, Jay took his leave, striding back through the audience to the dressing room with all the dignity a mad genius who almost set a fan aflame can muster.

Upon his exit, we stumbled into the night air, exhilarated, a little shook up, but, for the most part, intact. I never saw Jay play live again—he died in 2000. I wonder if Ms. Flashdance did. If so, I hope she wore a fireproof fedora.