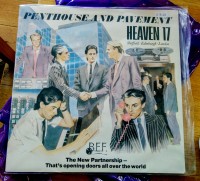 Hello again! I’m back after a brief hiatus from the blog while I moved the operations for Dugout Discs and its subsidiary holdings (wink) from Toronto, Canada, to Portsmouth, England. We’re by the sea, people! It’s glorious. And the even better news is that Portsmouth has at least four decent places to buy vinyl, including a well-stocked HMV. My two favourite shops so far are a hip little venture called Pie & Vinyl, which offers both the latest record releases and, at an adjoining cafe, tasty meat pies cooked to order; and a used record shop, Soundz, which boasts an impressive collection of records from the ’70s and ’80s, most priced around five pounds. Here you can see my very first purchase from Soundz, a classic by Heaven 17 with a cover that I hadn’t seen before in North America. Now I just have to find a new turntable to play it on. I had to give up my beloved Denon player prior to moving– the electrical current is different here, don’tcha know– but at least I found it a good home. The search begins!